Benbecula is a small island – eight miles by eight miles – squashed between North and South Uist. It’s generally flat with more loch than rock, but still had plenty to occupy us for a day. We started by climbing the high point – Rueval, at 406 feet not much of a challenge (the higher hills in the distance are on North Uist). 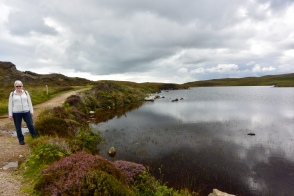 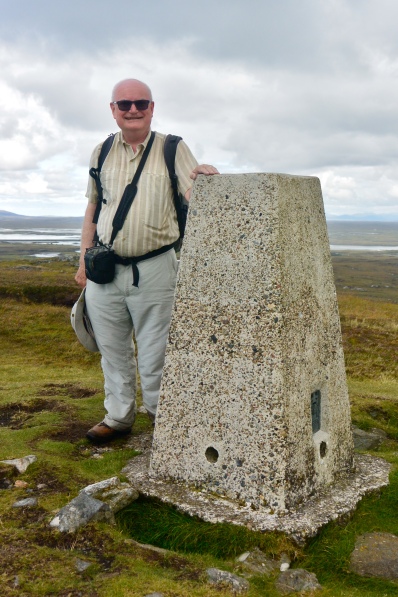 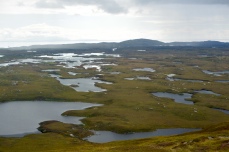 We were followed up by a family of three. You can see the mother and daughter in one of the pictures above, and if you enlarge it you will see that they are wearing skirts. Not ideal hiking garb, but at least they had boots. The father was too close to photograph unobtrusively, but I can report that he was dressed for the city – collar and tie, overcoat and smart leather shoes. As this was a wet, boggy climb I dread to think what state they were in by the end of it!

After marvelling at other people’s odd clothing choices, we headed back to the car and drove off in search of lunch. This we found at yet another of the excellent Hebridean bistros which have sprung up over the last few years – Charlie’s at Bailivanich.

Next stop, Nunton (once site of a convent, hence the name) and the ruins of Teampall Mhoire (Chapel of Mary). 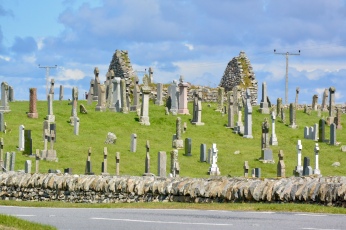 As always, I looked for interesting gravestones. The two below told a sad story of three MacDonald brothers lost too soon, but the information which caught my eye first was that one of them died in Belvidere Hospital in Glasgow. Long-term readers might recall that last year I took part in a historical research / creative writing project about the nurses at the Belvidere around the time of the First World War (The Zombie Ward), so I honed in on this immediately.

Across the road from the chapel was Nunton Steadings, an 18th century farmstead which our guide-book claimed to be a heritage centre, shop and tearoom, but it was no longer functioning as such. An interesting plaque commemorated its history as site of a land raid in 1923 but, in the absence of the heritage centre, I had to look this up later. I found the story on the website of Nunton House Hostel which stands opposite the Steadings. 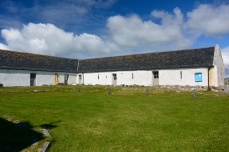 In the 19th century Benbecula and South Uist were owned by Colonel John Gordon of Cluny, a ruthless landlord who cleared tenants from much of his land, including Nunton Farm, to be replaced by sheep. After the First World War, the government promised to return land to ex-soldiers, a promise which it did not keep, hence the raid after which the farm was split into eight crofts. Nunton House was also divided, the occupant of 4 Nunton being Roderick MacDonald – look back at those gravestones! 4 Nunton is now the hostel and the rest of the house is privately owned.

Our last walk of the day was on the Isle of Flodaigh where we hoped to see seals and otters. On the way, the hills of North Uist were looking particularly beautiful and it was necessary to stop several times to look at them. The central peak is Eaval. 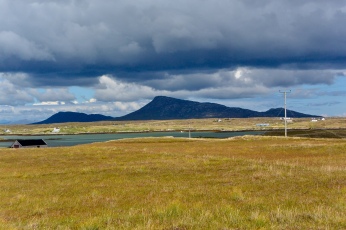 Flodaigh is a tiny islet connected by a suitably tiny causeway to Benbecula. As we walked out to the seal viewing spot we passed a car which will never go again. According to our walking guide it had been pressed into service as a seal information centre, but even this role was now long behind it. And what’s that in the bracken? A sculpture? Or a rusting farm implement? Let me think … 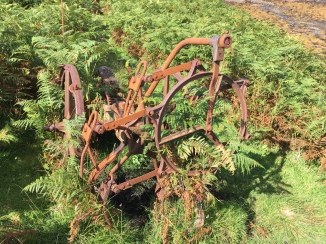 We did see seals, but once again the otters refused to appear.

Despite that, it was a lovely spot to just sit awhile and appreciate the gorgeous colours. 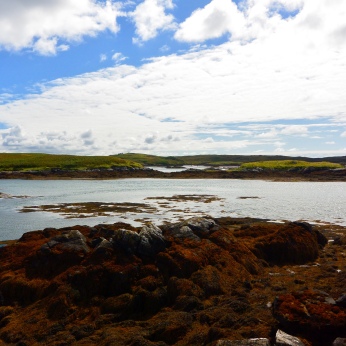 And then – back to our hotel on South Uist after another wonderful day. Could we keep finding beautiful places to visit for the rest of our stay? I’ll leave you to guess till next time.