Rain, sleet, rain, hail the size of marbles, rain, howling winds – and did I mention the rain? February has been a terrible month, but there’s no point in sitting at home moping about it so there’s still plenty report. We visited Glasgow Cathedral where, although we’ve been there umpteen times, John always finds new things to snap, such as these grotesques and a poignant memorial which I’ve never noticed before.

In memory of Sundays

The memorial below is to Thomas Hutcheson (1590-1641) who, along with his brother George, bequeathed money to found a hospital for the elderly and a school for poor boys. The school is still operating today, although fee-paying and co-educational, as Hutchesons’ Grammar School. The original Hutchesons’ Hospital was replaced between 1802 and 1805 – this building still exists and now houses a fancy restaurant.

Peter Lowe or Low (c. 1550 – 1610), whose memorial is on the left below, was a surgeon and founder of the institution now known as the Royal College of Physicians and Surgeons of Glasgow. The image on the right is at the entrance to the churchyard, with the Museum of Religion behind it and two lampposts featuring Glasgow’s Coat of Arms. 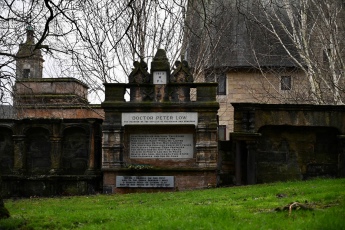 Some interior shots below include the Martyr’s Memorial which commemorates nine Covenanters executed in Glasgow between 1666 and 1684. Covenanters believed in the Presbyterian form of worship. Scotland wanted to keep its church independent from the English episcopal church headed by the monarch, and this led to a political crisis as signing the Covenant was seen as treason. In the 30 years up to 1690, around 18,000 people died in battles and persecutions. 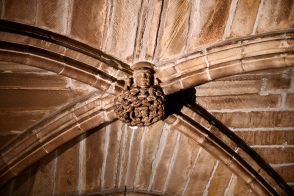 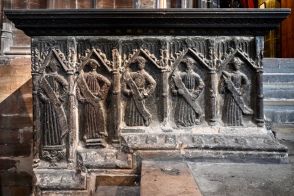 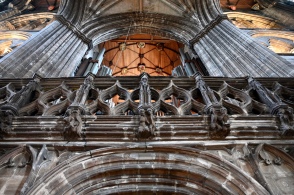 Looking up to the roof

In the two shots below, you can just see at the edges the reason for our visit – a Historic Scotland exhibition called Romantic Scotland through a lens which explores life in 19th century Scotland through HS’s photographic archives (on throughout March).

The explanation is here if you want it, but life did not look very romantic to me! Blood, sweat, toil and tears sounds about right. 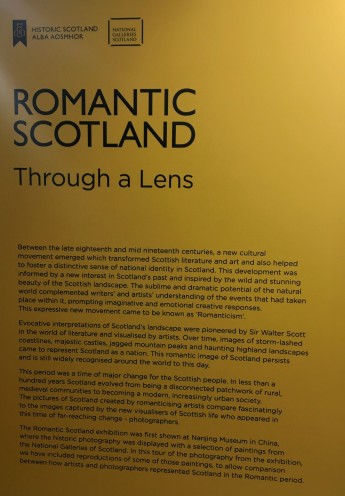 However, I enjoyed the exhibition – some of my favourite images are below. My great-grandfather would have been a ploughman around the same time as this man, portrayed c1890.

Across town at GoMA (Gallery of Modern Art) we visited a couple of good exhibitions this month (both now finished). The thought-provoking Everyday Racism documented ten micro-acts of racism. Though the photographs are staged, the incidents are all true, for example the story of Simone’s hair. It doesn’t matter how “micro” the action, the effect of such depersonalisation can be huge. 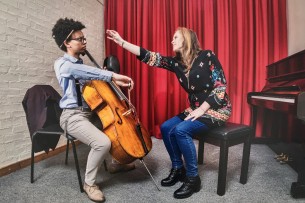 Domestic Bliss explored “domestic labour and feminism, public and private space, intimate relationships and historical narratives”. I liked the faux-domestic setting of some of the exhibits, and the interesting juxtapositions from different periods, such as this bathroom cabinet containing early 20th century shaving mugs by Jessie M King and pefume bottles by Niki de Saint Phalle (1982).

Paisley, the town my Mum lives in, is about half an hour’s drive from us. We don’t often act as tourists there, but it’s well worth a wander and we took advantage of that on one of the few dry afternoons of the month. Paisley town centre has the highest concentration of listed buildings anywhere in Scotland outside Edinburgh, plus a great selection of street art, but I’ll keep that for later. Let’s start with churches: 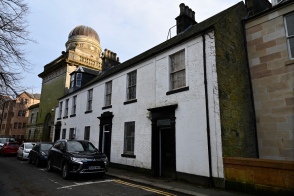 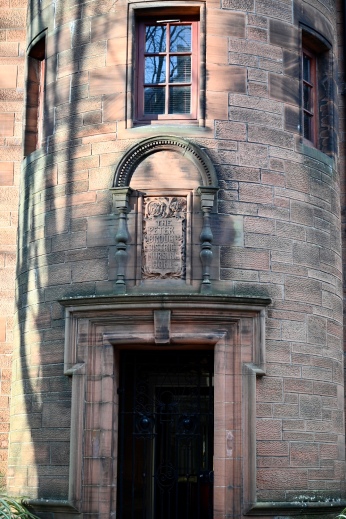 The Town Hall and the Coat of Arms on a nearby bridge: 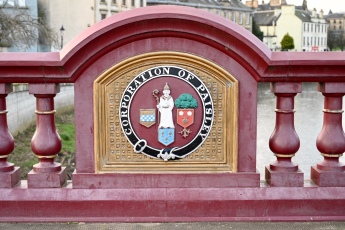 A selection of statues: 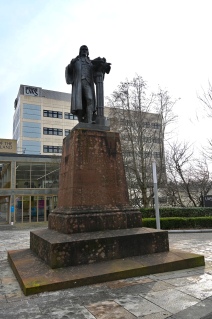 And some faded grandeur to finish. I think the ghost sign on the left says Royal Bank of Scotland. The building on the right is the Paisley Trophy Centre. 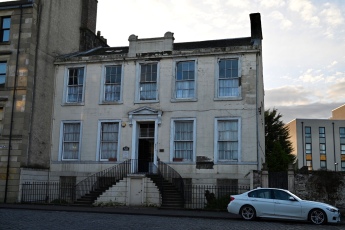 In February, we went to not just one Window Wanderland, but two. Window Wanderland is a scheme in which communities brighten up winter by transforming their streets into an outdoor gallery. Govan joined in for the first time this year – there were some good windows, but they were very spread out and as it was a cold, wet evening we didn’t explore the whole thing. 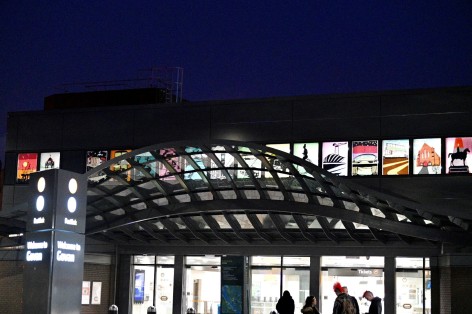 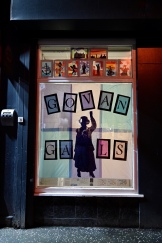 Govan’s buildings looked splendid by night, as did the statue to Mary Barbour, leader of the Rent Strikes in the First World War (you can also spot her in the Govan Gals window above). 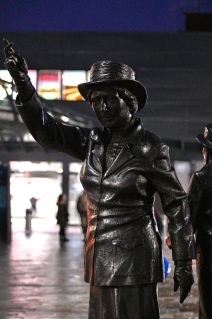 Another of my sheroes appears in the window gallery – 19th century philanthropist, Isabella Elder “a true woman, a wise benefactress of the public and of learning”. One of the buildings she gave to Govan, Elderpark Library, is in the gallery below. We also visited the early medieval Govan Stones in the Old Parish Church – it was a relief to get out of the cold for a while. 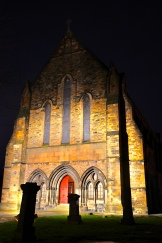 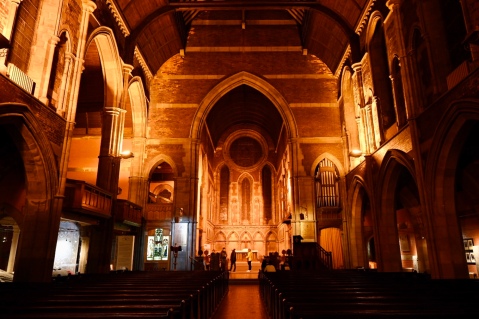 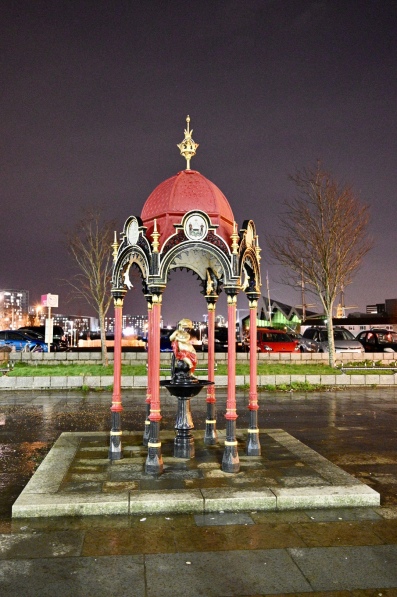 The second Window Wanderland was in Strathbungo, which we also visited last year. It was an even colder, wetter night, but this was a more compact site so we persevered and saw most of it. Red Riding Hood is my absolute favourite of all the windows we saw over the two events. It’s simple on the surface, but so clever.

There were many, many more: below is a flavour of the ingenuity on show. Some householders even put on performances, and we were very grateful to the lady who came out with a tray of mulled wine. That warmed us up for a while. 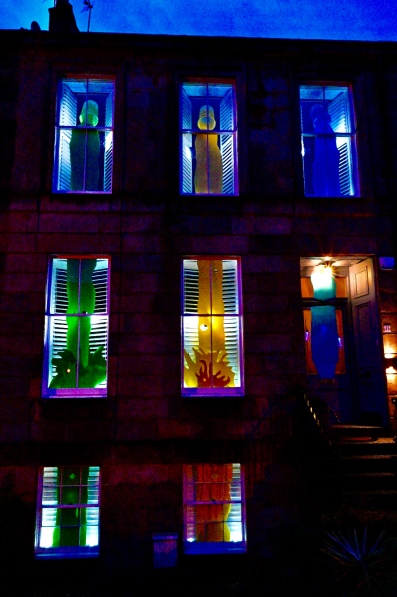 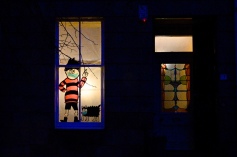 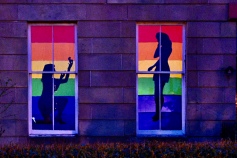 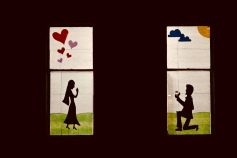 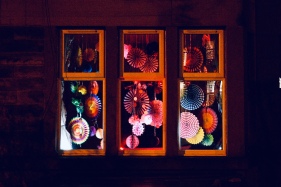 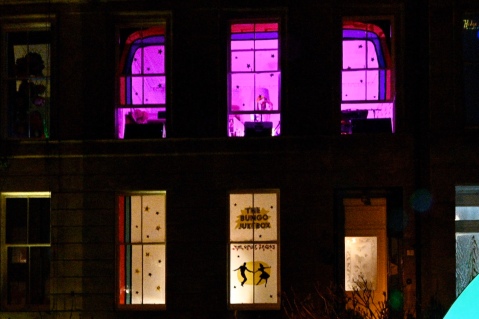 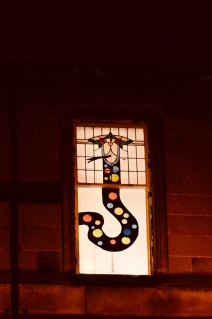 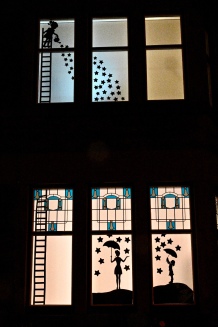 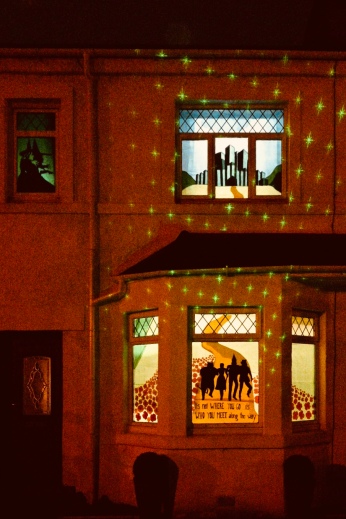 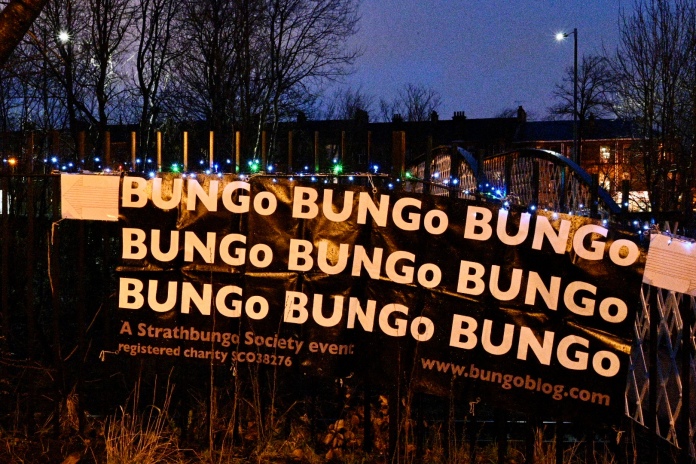 I’m running out of time, so on that colourful note I shall wrap up February – here’s hoping for a warmer March!