Most of the rest of our trip was to be spent in Far North Queensland. On arrival in Cairns we picked up our hire vehicle, a 4×4, and set off for Port Douglas for two nights.

The following day, we had booked a Quicksilver Cruise to the Outer Barrier Reef, including a chance to go snorkelling.

Anabel and John on Quicksilver Cruise 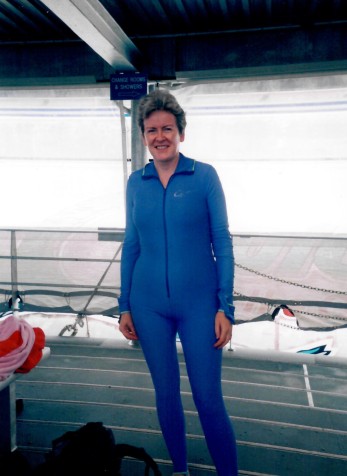 This was memorable, but not as memorable as what happened that evening. After dinner, we went for a wander round the harbour area. When confronted with a post-and-rope barrier, I made the split-second decision to step over it rather than retrace my steps. What I didn’t realise was that the ground on the other side was lower – not much, but enough that one foot dropped further than expected and the other failed to clear the rope. I fell in a crumpled heap to the ground.

John helped me up and I felt no pain until I tried to put my left foot down – aargh! I could feel movement where there shouldn’t be movement, and knew immediately that something was broken. I managed to hobble back to the hotel, by walking on the side of my foot, and we went to bed very worried about what would happen next.

The following morning, hotel staff helped us to get an appointment with a local doctor and I entered the Australian health service. I found it very efficient, although there was a lot of driving around for things that would probably all happen under the same roof here. For example, the doctor wanted me to have an X-ray which would happen in a hospital at home. Because the local facility was closed that day, we were sent to one in another town which I was surprised to find was just a unit in a shopping centre. I was handed the X-rays (which I still have), then it was back to the doctor in Port Douglas who confirmed what I already knew: I had broken two metatarsals.

After much phoning, he got me an appointment the next day at the Fracture Clinic at Cairns Base Hospital, so off we went back to Cairns when we should already have been at our next destination. On arrival at the hastily booked hotel, John was despatched first to an address the doctor had given us to procure a pair of crutches (which I also still have), then to buy a takeaway dinner which we ate in our room. This was our view, the only picture we have of Cairns! 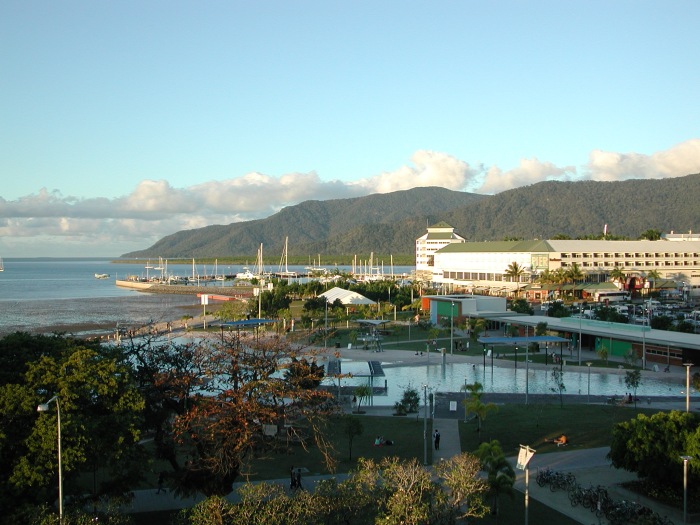 To cut a long story short, I was plastered up and sent on my way. I have two complaints about the plaster cast (or stookie as we call it here). First, I was given a choice of colour and picked blue. Had I known that, once dry, they were going to slit it down each side and tape it up, I might have chosen pink to match the tape. (This was because I would have to fly with the plaster on, and it needed to be easily removed if my leg swelled up.) Second, the doctor in Cairns said I mustn’t put weight on my foot, so it was not a walking cast and I hopped around for the next two weeks. The doctor I saw at home was very scathing about this and said the foot should have been load bearing the whole time. This would have made life so much easier, and allowed me to see so much more on the rest of our trip. Still, we made the best of things and, as you can see below, I was still smiling as we re-joined our schedule the next day to make our way to Daintree.

The accident was on the 6th of July, 2004, so I have recently passed the 16th anniversary. Does it still affect my life? Yes it does. The doctor in Cairns said that in a few months I wouldn’t know that I had done it, but there is never a day passes when I am not conscious of it. I still get a certain amount of pain and discomfort, and my left foot is quite inflexible. It has little power in it which makes going uphill more arduous than it needs to be, and can affect my balance on uneven ground. Someday, I am fairly sure, I am going to need some sort of surgery on it.

But back to 2004. I can’t leave this subject without paying tribute to John who was an absolute rock throughout. Not one word of reproach passed his lips: I can tell you that if it had been the other way round, and he had done something that daft, I would probably (definitely!) not have been so restrained. He spent ages on the phone calling ahead to accommodation, airlines, and other places where we had reserved services, to make sure that my needs would be met, and just generally took care of me for the remaining two weeks of our tour. He’s a keeper!

Needless to say, these days I never jump over barriers and always walk round.