The weather on New Year’s Day was fairly typical of January: cold and icy.  A steep path opposite the end of Mum’s street in Paisley leads up to the Gleniffer Braes from where we got the best view of the month. The Campsie Fells are to the right in the picture above, and the beginning of the Highlands, including Ben Lomond, can be seen to the left. A couple of zoomed shots show more detail.

We are still in a fairly strict lockdown, so otherwise have been confined to Glasgow. We have hardly any new photos because we are doing all the same routes that we did in the Spring, often in the dark after John finishes work. Thank goodness for weekends and the canal and river paths. Here’s a great view down the Clyde towards the Riverside Museum, including the tall ship Glenlee, and a swan admiring its reflection on the frozen canal. 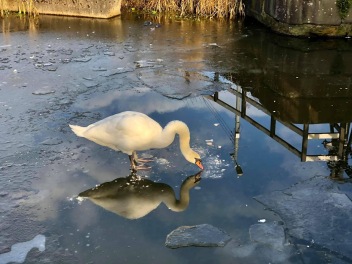 In January I would normally be reporting excitedly about all the Celtic Connections concerts we had been to. Not this year! The entire programme has been moved online. Nothing can replace live performances, but the upside is that we can watch everything: over 100 musicians and 19 days with at least one, sometimes two or three, concerts each evening. At only £30 for a Festival Pass, that’s an absolute steal. I suppose it is better for my waistline too, because we are also not going for all those pre-theatre dinners. Nor could we go out for Burns’ Night this year, but we improvised with John making a very good Address to a (veggie) Haggis.

The virus continues to rage (though vaccines are on their way – Mum has had her first one) and Brexit continues to have “teething problems”, but at least Trump has finally gone. I often include a Scottish Word of the Month in my gallivanting posts, but this month a Scottish video seems more appropriate. Here’s Iona Fyfe with a ditty called Donald whit a loser to the tune of  Donald where’s your troosers?

You’ll be sad to know that Iona is sometimes the target of vile abuse for daring to sing in Scots, as is Miss PunnyPennie who offers a Scots word of the day on Twitter. Here’s another phrase for you: the Scottish cringe – a feeling that anything Scottish is bound to be inferior. Do any other countries have a similar phenomenon? Or people who are so threatened by their own culture that they have to go on the attack to decry it? It’s bizarre and sad.

Anyway, let’s not end on a negative note. How about some graffiti ceramics? We first noticed these in the summer around Sydenham Lane in Hyndland, an area we often walk through. Lately, we’ve spotted some new ones even closer to home and I recently read an article (click the link for more examples) identifying the artist as Louise McVey. She says: “When lockdown initially hit … it became clear to me that this was what I could offer – to add something to the streets that may make a difference for people on their daily walks.” It has certainly made a difference to us – we love spotting them, and it’s very different from the usual type of street art. 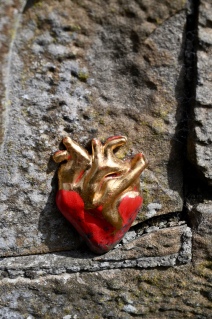 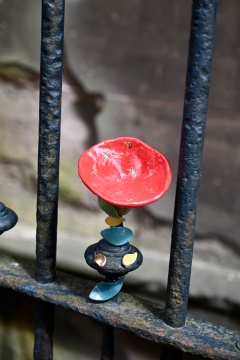 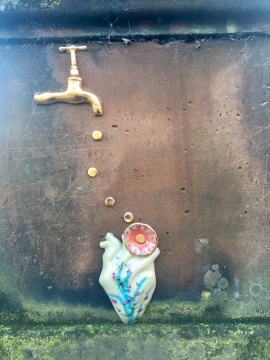 So we’ve made it through January healthy and safe – I hope you all have too. There is no chance of our current restrictions lifting before mid-February at the earliest, but I’ll do my best to have at least a little bit of gallivanting to report on at the end of the month.