Tramping the streets of Glasgow on my lockdown walks, I found having themes to look out for helped to stave off boredom (well, not entirely – just don’t ask John about the moaning). One such theme was churches. Some still fulfil their original purpose, while others have taken on a new lease of life with new functions. A route from my house passes several of these.

Closest to home is Òran Mór, Gaelic for great melody of life or big song, which sits on the corner of Great Western Road (GWR) and Byres Road. That’s a busy traffic junction, so it’s hard to get a photograph without cars whizzing by. I prefer the view on the left taken from Grosvener Terrace which runs alongside GWR. Formerly Kelvinside Parish Church, Òran Mór now has a café-bar and restaurant and spaces for music and drama productions. One of our friends went to Sunday School here and refuses to set foot in it as a result! It was one of my favourite places to go in pre-Covid times and we have seen many great bands and plays in its downstairs venue.

Continuing down GWR towards the city centre, the former Lansdowne Parish Church is just on the other side of the River Kelvin. It also houses a theatre / bar combination and is now known as Websters. Below you can see it looking across Kelvin Bridge (it’s the first steeple, the further away one is St Mary’s Episcopal Cathedral) and, in rather nicer weather, from the river bank underneath. 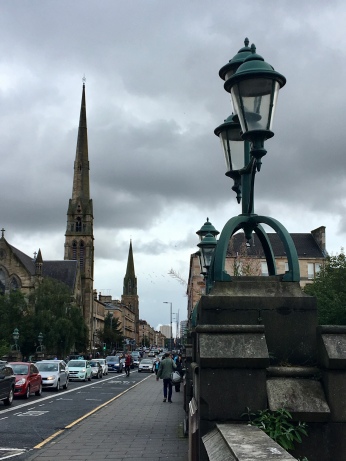 Websters from across the Kelvin Bridge

Websters from the River Kelvin

The façade of Websters has some wonderful stone carvings which we never looked at properly before lockdown. 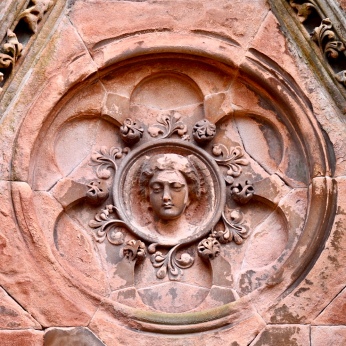 From Websters, I cross GWR and continue down Park Street, then turn right up Gibson Street. This takes me to the University of Glasgow campus at Gilmorehill where former church buildings have been pressed into academic use. The clock behind the Sir Charles Wilson building stands in the playground of the neighbouring Hillhead Primary School. I had forgotten about it, or I could have included it in my clock post a couple of months ago!

From here, I turn left and follow the road as it bends right up University Avenue, which takes me back to Byres Road at another busy junction. I go straight across and walk up Highburgh Road until I reach Hyndland Street on the left. At its junction with Hyndland Road is another former church (Dowanhill Parish) which has been converted – wait for it! – into a restaurant, bar and theatre: Cottiers. It too has some interesting carving and, like Websters, is called after the artist who made its stained glass windows. 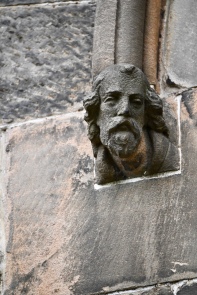 I then continue up Hyndland Road till I reach GWR again, at which point I’m only a few more minutes from home.

I’m a couple of days late, but I’m linking this post to Jo’s Monday Walk. This week she’s tilting at windmills – go see!