One of the reasons I have been so organised about getting my A-Z posts done in advance is that I knew I was going to be on holiday for part of the challenge period. We’ve just come back from a lovely week in Bruges – as B is long past I’ll write that up at my leisure, but we made a day trip to Ghent (or Gent, locally) which makes a perfect bonus post for G.

Ghent is a short (25 minute) train journey from Bruges, although it’s then a bit of a hike to the centre. We started off in the area around Sint Baaf’s Cathedral. The cathedral itself is not very photogenic at the moment because it’s undergoing restoration, although you can’t photograph it’s most famous feature anyway – the beautiful Lamb of God altar piece painted by Jan and Hugo Van Eyck in the fifteenth century. Almost next door are the Belfry, which we climbed even though there was a lift part of the way up (halos shining) and the 13th century Sint Niklaas church. We particularly loved the dragon, which used to adorn the Belfry but is now in the museum, and the quirky façade of the Masons’ Guildhall, opposite Sint Niklaas, which has recently been embellished by devilish-looking weathervanes.

Top of the Belfry 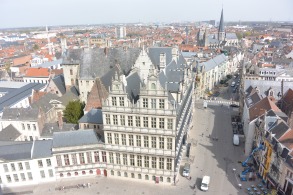 Stadhuis from the Belfry

Sint Niklaas from the Belfry

Next stop was the former port area, and the quays of Korenlei (west side) and Graslei (east side), also shown at the top of the post. Most of the buildings have kept their facades, if not necessarily their interiors. The former inn, De Zwaene, is now Marriott’s Corn House restaurant, for example. Take a look also at Graslei’s tiny Tollhouse, which was built in 1698 by filling in a narrow alleyway. It’s believed to be the smallest house in Ghent – I can’t see there being much competition! 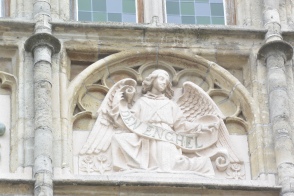 From the quays, we meandered further north passing the Great Butchers Hall (Groot Vleeshuis – 1404), Gravensteen, castle of the Counts of Flanders, and Neptune guarding the Fish Market (Vismarkt – 1680). We stopped in at the Folklore Museum, housed in the Alyn Hospice which was originally built to house poor, elderly women in 1363. It represented the price of a pardon in a murderous feud between the wealthy Rijm and Alyn families. Finally, by way of some more picturesque houses such, as 81 Kraanlee, we arrived at Vrijdagmarkt (Friday Market), Ghent’s largest square since 1199. 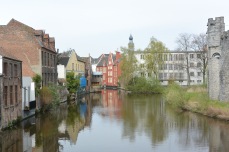 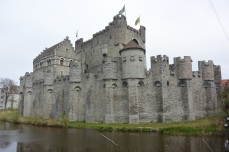 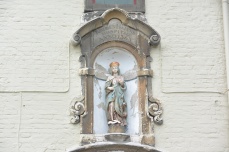 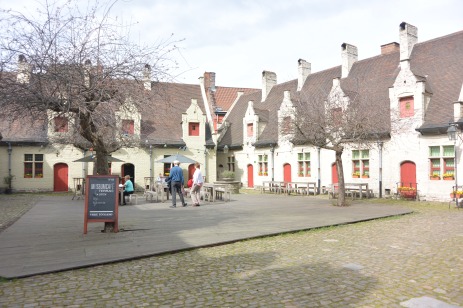 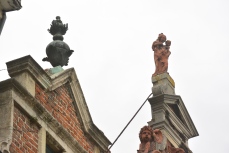 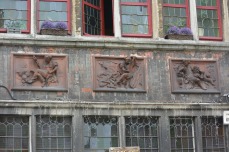 After that, we trekked wearily back to the station to go “home” to Bruges. We agreed that, although Ghent was interesting, Bruges was much prettier and we were glad we had chosen to make it our base.