Cathedral Valley is one of the most remote parts of Capitol Reef National Park. Accessed by fording the Fremont River, a 60-mile dirt road loops round features such as the Bentonite Hills and the Temples of the Sun and the Moon. A storm was brewing, as you can see in some of the pictures, and switchbacks and mud-slicks meant I spent a lot of the journey clinging on with my eyes closed. Don’t worry, I was the passenger.

Temples of the Sun and Moon from above 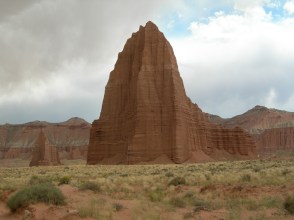 Temples of the Sun and Moon

The Chimney Rock trail took us high above – well, a rock that looked like a chimney. Once again, a storm was brewing and, as we didn’t want to be caught up there, we raced round in record time.

We left Capitol Reef via the Notom-Bullfrog and Burr Trail Roads which took us along the Waterpocket Fold, the wrinkle in the Earth’s crust that I mentioned in my last post. It’s amazing to see the land laid out in waves and helps you understand why the cliffs might be thought of as reefs. 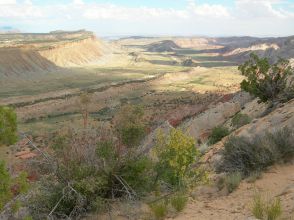