There can’t be a corner of Glasgow which hasn’t featured in home-grown films and TV shows such as the long-running detective series, Taggart. But Hollywood has also come to call on several occasions. For example, there was great excitement in 2011 when the centre of Glasgow “played” Philadelphia in World War Z – especially as the star was none other than Brad Pitt. Here’s the City Chambers in George Square with the green signs and yellow traffic lights of a US city.

In my own picture of the same building, you can just about make out the normal UK lights at the bottom left. 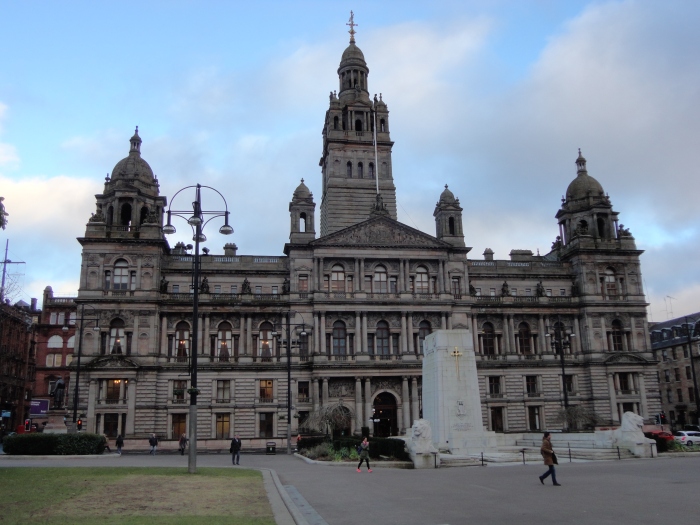 Zombie attacks aren’t my thing, so I haven’t seen World War Z. However, shortly after Brad Pitt’s visit, Halle Berry was here filming the San Francisco sequences of Cloud Atlas. That I did go to – and very strange it was, thanks to CGI, to see streets which were totally recognisable on one side and completely imaginary on the other. Glasgow has also doubled as 1890s New York in House of Mirth (with Gillian Anderson) and, as far as I know, the most recent Hollywood A-lister to film here was Scarlett Johannson (Under The Skin).

We’re famous! Come and see us! I hope my roundup of Gallus Glasgow has tempted some of you.