July 20, 2015 42 Comments
This is a lovely, short loop (under 3 miles) starting at the Dunmore Pineapple. The 4th Earl of Dunmore gave this eccentric building to his wife as a birthday present in the 1770s. Pineapples were exotic and highly prized delicacies symbolising power, wealth and hospitality, so I can see the point he was trying to make – but it must have been rather a large gift to keep a secret. These days, it belongs to the National Trust for Scotland which rents it out as a holiday home.

After leaving the Pineapple’s grounds, we walked through an avenue of Giant Redwood trees. A detour uphill took as to the ruined Elphinstone Tower (1510) and its overgrown graveyard. I found it sad to see the tombs so neglected. 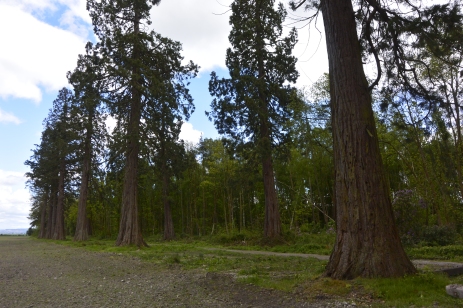 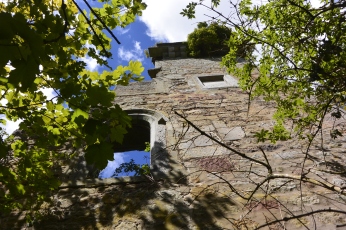 The path then led us through farmland and an avenue of much smaller trees before crossing a road into the Conservation Area of Dunmore Village. What a pretty little place! It was rebuilt in the 19th century by Catherine, widow of the 6th Earl, in an English style with houses round the village green. The fountain was brought specially from London and has recently been restored. The house with the horse-shoe shaped door (bottom left, click to enlarge) used to be the blacksmith’s, or smiddy.

The path continued with fields of oil-seed rape on one side and the Firth of Forth on the other. Across the water, we could see Clackmannan Tower.

After the quaintness of the conservation village, it was then a surprise to come across a brand new and very modern house. 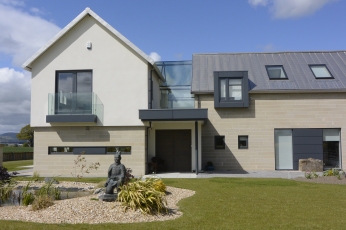 Finally, we crossed the road again and returned to the Pineapple via Dunmore Park. This was built as a family home in the 1820s, became a school in the 1960s and is now practically derelict. According to the route notes there are plans to turn it into luxury apartments, but it may be too far gone for that.

I loved this impressive array of buildings from different eras in a very short walk, and the views weren’t bad either. Pop over to Jo’s Monday Walks to see where everyone else has been.