All the hillwalking we did in the first part of 2005 was to prepare us for a trip to Borneo to climb Mount Kinabalu (13,435ft) in July. This is not the highest we’ve ever been – Pikes Peak in Colorado, which featured in an earlier #SquareTops, is 14,115ft. However, a road goes up to its summit so that’s not comparable in terms of achievement.  Kinabalu was a really tough, two-day hike, and even though we started at 6,122ft that still meant we climbed over 7,000ft at altitude.

Because John had hurt his back six weeks earlier we were out of shape, and I hated every second. If I were to select the worst experience of my life, Kinabalu would be right there near the top of my list. I don’t even feel a sense of pride that we did it – but anyhow, here we are at the same point as the picture above to prove we were really there. 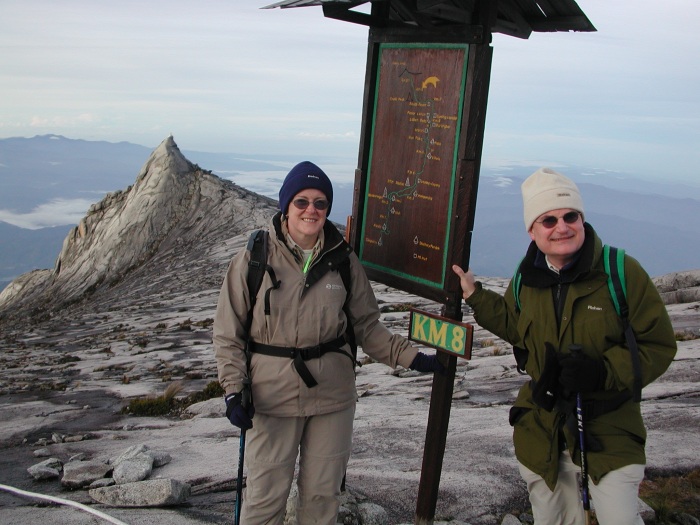 We’re on our way back down, which is probably why I have managed a smile. The white rope denotes the route to follow across the summit plateau – it wasn’t necessary for us because it was a clear day, but people have wandered off the correct route in the mist and died. The peak behind us is not the one we climbed which was Low’s Peak, the actual summit. Another peak, Donkey’s Ears, was partially destroyed in an earthquake in which several people died in 2015. Sometimes I feel very lucky to be alive, and someday I will get around to telling the full horror story of our adventure.

Here ends my mini-series-within-a-series of top of the world shots for Becky’s #SquareTops challenge. For the rest of the month I’ll be featuring some of the smaller hills we’ve tackled in the last few years.