The name Port Glasgow means exactly what you might expect. It was originally a fishing hamlet called Newark which expanded because large ships were unable to navigate the River Clyde, then shallow and meandering, to the centre of Glasgow. Newark became the port for Glasgow in 1668 and was known as New Port Glasgow until this was shortened in 1775. By the 19th century Port Glasgow had become a centre for shipbuilding, but today only Ferguson Marine remains and in its shadow lies a lingering vestige of the old name, Newark Castle (c1484). It was once home to the Maxwell family, hence the initials PM on some of the windows.

This visit took place in November after the castle had closed for the winter (and the foreseeable future, as it turns out), but we had a look round the outside before setting off on our walk. 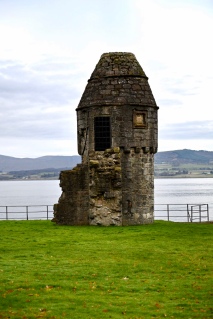 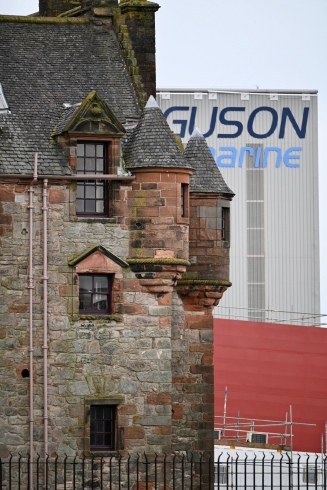 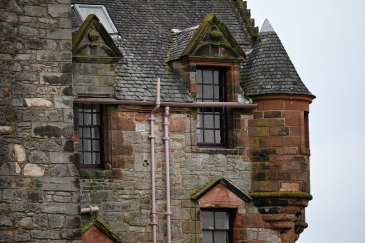 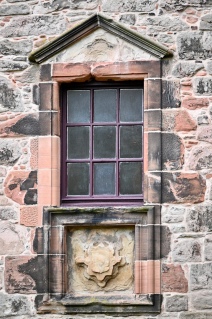 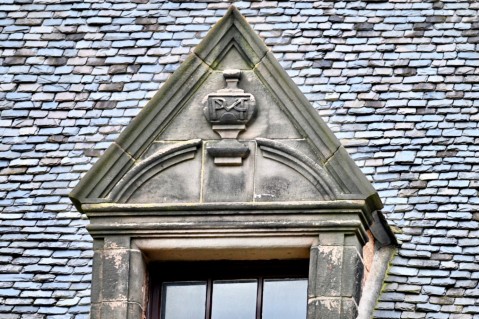 The Port Glasgow Heritage Walk has been created by the blogger The Greenockian and can be downloaded from the link. Before setting off west on her route, we walked east for a mile or so along the riverside walkway. The posts you can just see sticking out of the water, in the first picture below, are the remains of old timber ponds. At the beginning of the 18th century vast amounts of timber were imported into Port Glasgow and stored in the ponds, being seasoned by the salt water, until needed by local shipwrights or sawmills. 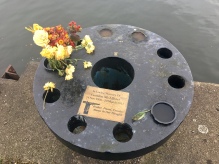 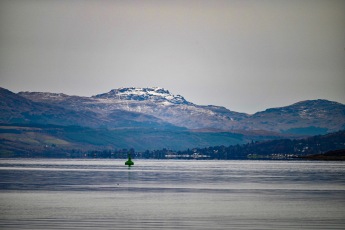 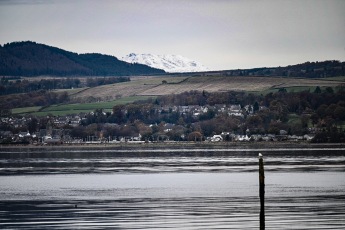 Once back at the castle, we started the walk proper by walking west past the gates of Ferguson Marine. Across the road is the Ropeworks Building where ropes and sails used to be made, but which was converted into housing in 2007/8. 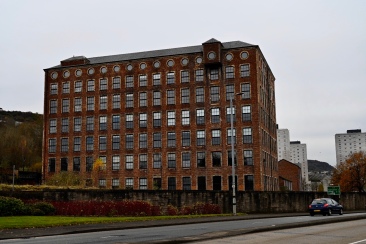 The route then took us through Coronation Park. Points of interest included an old steam hammer, manufactured by Glen & Ross of Glasgow, and a memorial cairn to the Clyde Boating Tragedy of 1947 when 20 people died in an accident while on a pleasure cruise. 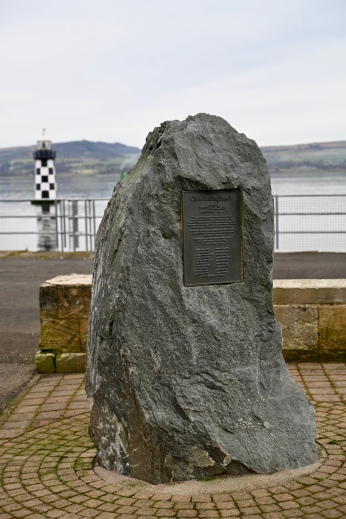 On the back wall of Fergus Monk’s garage at the West Quay are these two colourful murals by Jim Strachan. One shows fishing boats and the catch being processed on the quay, while the other shows people enjoying themselves in a non-socially-distanced way that seems but a dream now.. 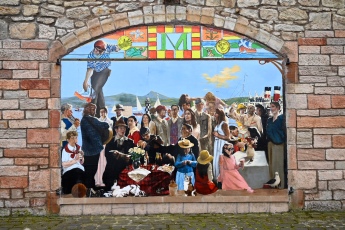 Looking out to the Clyde, there are two lighthouses here, Perch Lighthouse (1862) on the treacherous Perch Rock, and the taller West Quay Lighthouse built in the 1870s to guide ships using the docks.

Across a busy road from here is a large retail park (a good stop for lunch, if anything is open, I think we went to Marks and Spencer). Set into the pathway are slabs with the names of local shipyards, such as the Inch Yard. On the way out of the retail park going towards the town centre is a replica of the Comet, the first commercial steam-powered vessel in European waters (1812).

We passed two churches – St John the Baptist (left below) was built in 1854 for the growing number of Roman Catholics, many from Ireland, who came to work in the area. The current St Andrew’s Church dates from 1823, but there has been a church on the same site since 1719. You can see St Andrew’s again peeking out from behind the Old Bank Building.

Port Glasgow has had a railway since 1841. The current station building has 14 murals made by local people, each celebrating part of the town’s history. I had a hard time choosing favourites, so here’s a large selection, starting with the remembrance panel because our visit was very near Remembrance Sunday. 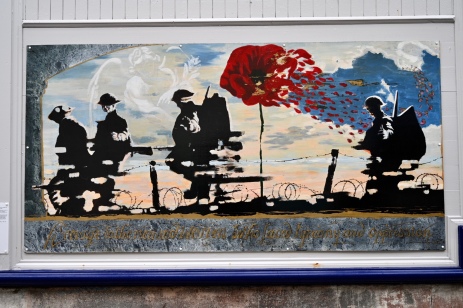 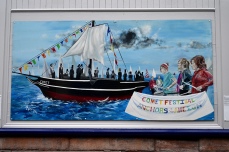 Opposite the station is the Star Hotel with a couple of interesting ghost signs – or are they really ghost signs if the original business is still there? Old signs anyway! 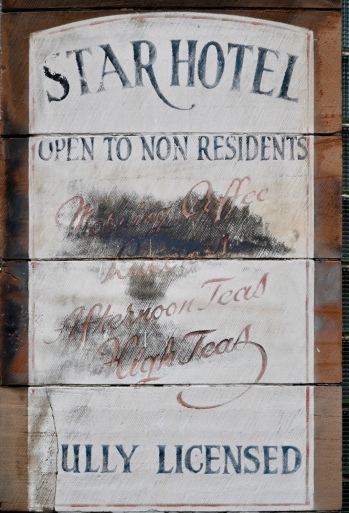 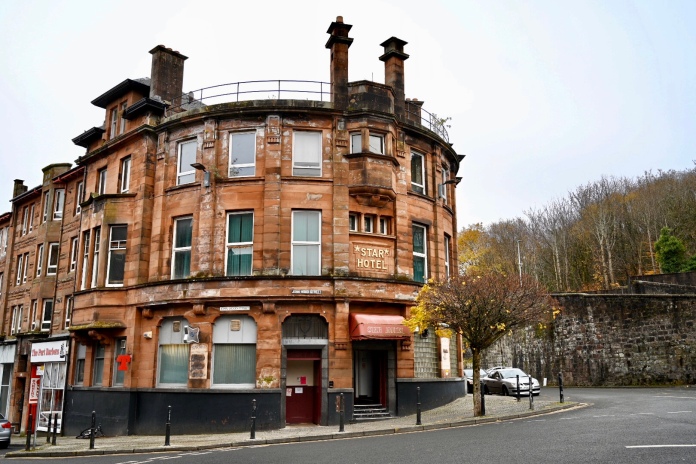 A stroll down King Street took us past the Salvation Army, then we turned down Customhouse Lane heading for the town buildings. 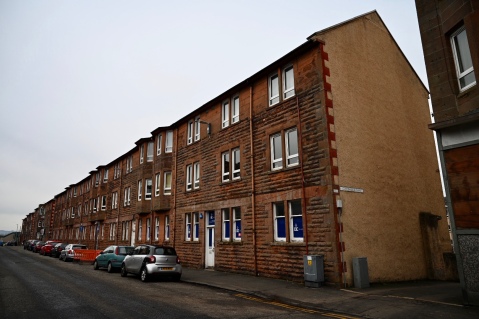 These date from 1816 and once included a court, a council chamber, prison and police department. Port Glasgow is now part of Inverclyde and no longer needs these things, so the building houses the public library. There are references to the town’s past with sailing ships everywhere, including the weather vane atop the 150ft steeple and on the coat of arms seen on the lamp. 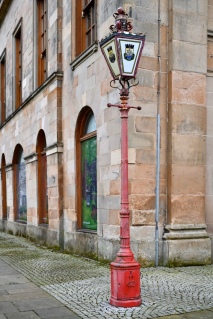 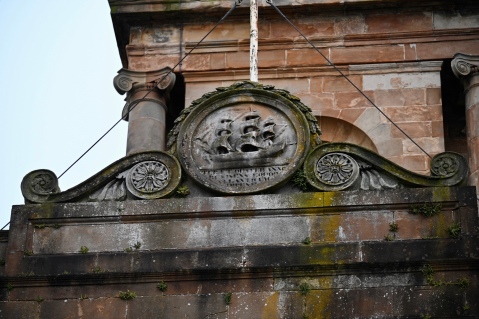 Across from the town buildings are two monuments, the War Memorial and the Endeavour sculpture. The latter was created by Malcolm Robertson in 2012 and is another celebration of the town’s shipbuilding heritage. 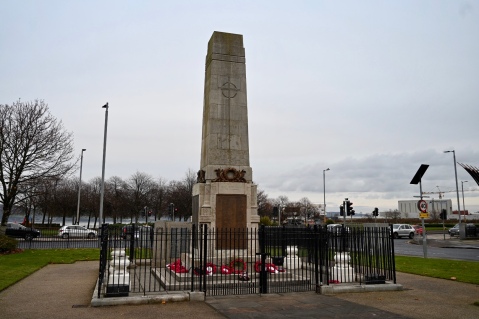 From here, we crossed the main road again to return to our car. Port Glasgow is somewhere I drive through regularly without stopping, so I’m grateful to The Greenockian for opening my eyes to its interesting history. Linked to Jo’s Monday Walks.