A daunder round Dundee

In November last year, when the world was a different place, John had a Friday meeting at the University of Dundee. I decided to go with him and stay for the weekend. We set off early in the morning and arrived with time for a quick coffee before the meeting began. From the window I could see Dundee Law, which I have never climbed, and decided that would be the first thing I would do once John started work. 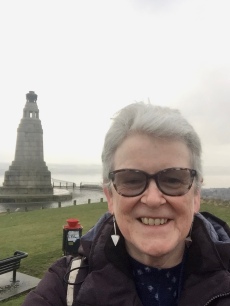 The 572-foot peak is the city’s most distinctive landmark. It’s a volcanic sill: an underground sideways flow of lava, forced through weaker rock 400 million years ago, which remained under layers of other rock for millions of years before wind, rain and glaciers cleared the softer rock away. At the top is a War Memorial with inscriptions to the memory of Dundee men who fell in the two World Wars, and a bronze brazier as a beacon which is lit on 5 days during the Autumn, marking important dates in the history of the wars. Normally, there are great views over the city but, as you can see, I was there on a rather wet day.

Oh well, never mind. I made my way back down to the university where there was an exhibition on housing I wanted to visit. While there I met these two characters. Oor Wullie is part of a 2016 public art trail. This model, When Wullie met Dr Manhattan by Sarah Coonan, was given to the university by an honorary graduate. The dog, Hope, is part of the mental health charity SANE’s Black Dog campaign to raise funds and awareness.

I visited several other exhibitions that day and, on the Saturday, we both visited Hello Robot at the V&A. Of course, all the exhibitions are now over and all the galleries are closed anyway, so instead of telling you about them I’ll show you some of the other characters I met around the city. These two were instantly recognisable as by street artists whose work I see round Glasgow a lot. Oh Pandah’s “big heids” pop up all over the city and, it seems, other cities too. 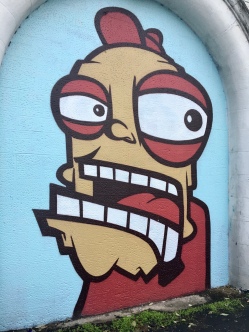 I loved these two elegant women at Spex Pistols, possibly the most interesting-looking opticians ever.

On a previous weekend in Dundee we visited Royal Research Ship Discovery which was built in the city, and in which the British National Antarctic Expedition set sail in 1901. Because of this Antarctic connection, Dundee seems to have an affinity with penguins. I came across a couple of remnants from another public art trail, and this little row, by Angela Hunter, running along the parish church wall. Apparently, they are often dressed up to suit local events, but were stark naked on this occasion. 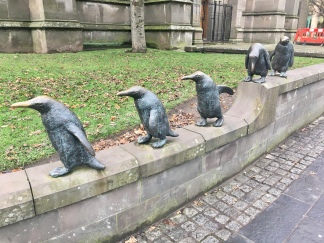 Not so Oor Wullie, who was already decked out in his Christmas jumper. He comes from a comic strip produced by Dundee publisher D.C. Thomson, and is joined on street by some of their other characters: Desperate Dan and his dog, Dawg, and Minnie the Minx. The dragon is not a Thomson character, but is based on a local legend. 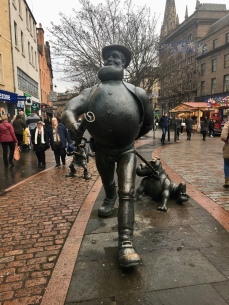 When it comes to statues of real people the choice, as usual, is dominated by men (other than the ubiquitous Queen Victoria). Below are Robert Burns and Adam Duncan (1731-1804), a Dundee born admiral who defeated the Dutch fleet off Camperdown (north of Haarlem) on 11 October 1797. However, I did find this monument to missionary Mary Slessor (1848-1915) who is also commemorated in a stained glass window in the McManus Galleries. 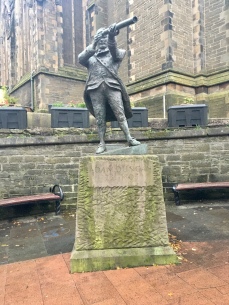 The Slessor window is in the gallery café so is hard to photograph without annoying people: however, on the stairs I managed to snap John’s hero, James Watt. And, always one to sniff out a bit of women’s history, I loved this portrait of Agnes Husband (1852-1929) by Alec Grieve. Agnes, a dressmaker by trade, campaigned for women’s suffrage and was active in the Labour Party, becoming one of Dundee’s first women councillors. 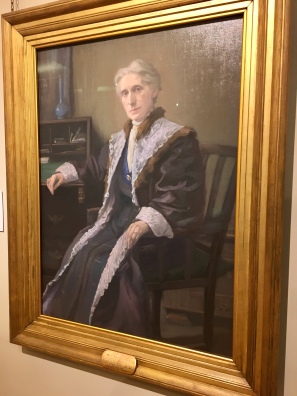 By this time it was 3pm, I’d climbed the Law, visited three exhibitions in three different galleries, had lunch and a good old daunder round Dundee, getting wet and cold in the process. Hotel check-in would be open and it was time to retreat from the rain to wait in comfort for John to finish work.