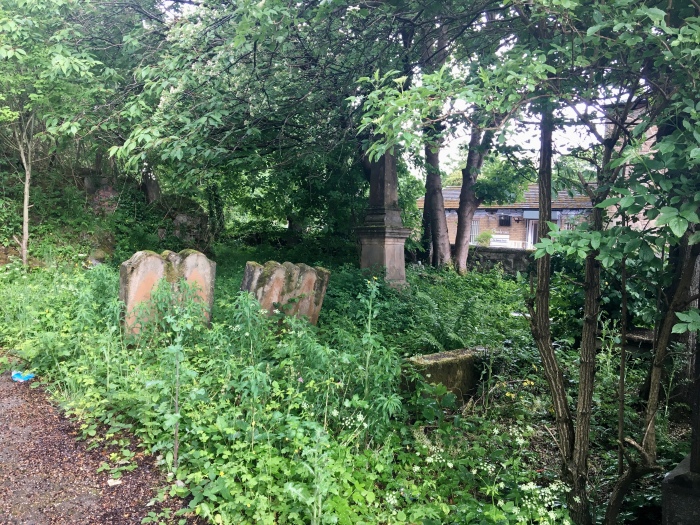 There’s nothing much to see at Maryhill Old Parish Church Burial Ground, and I only have this one image taken by poking my phone through the firmly padlocked gates. However, I like the story behind the founding of the church, so here it is!

Maryhill’s original Parish Church was built in 1826 on land donated by Lilias Graham, owner of the Gairbraid Estate and daughter of Mary Hill who gave her name to the whole area. Lilias’s involvement did not end there – once the church was completed, the next step was to choose a minister. There were three candidates and those who rented a pew voted for their choice. There was a favourite, Mr McNaught, but Lilias preferred Mr Wilson. Her solution?  She rented every unlet pew and Mr Wilson was declared elected on 29th June, 1826.

Lilias is described as a clever, good woman and kind, generous and hospitable – but also certainly without personal attractions.  She frequently entertained friends with dinners of the more substantial kind, and after the food had been cleared she would make up a rum punch. Her guests often left rather the worse for wear, and on one occasion a gentlemen of not too good a reputation stood to his feet and cried “Come Miss Graham, I will give you a toast – honest men and bonnie lasses”. The prompt reply was “Very well, but that is neither you nor me!” Paradoxically, she and her nephew, John Dunlop, set up the first British temperance societies in Greenock and Maryhill in 1829. Do as I say, not as I do?

These stories are courtesy of Alexander Thomson who relates them in his snappily titled book of 1895: Random notes  and rambling recollections of Drydock, The Dock, or Kelvindock, all now known by the more modern name of Maryhill: 1750-1894. I love the sound of Lilias!

Back to the church: Maryhill Old had a chequered history, well described by Diana Burns on the Glasgow and West of Scotland Family History Society webpage. By 1985, it was abandoned and unsafe, and around the turn of the century it was demolished. All that remains is this sad little graveyard on Maryhill Road, neglected and unkempt.

I’m sure Lilias would be distinctly unimpressed. She herself is buried in the grander surroundings of Glasgow Cathedral’s graveyard along with her father, Robert Graham, her mother, Mary Hill, and other members of the Graham family. The tombstone is very worn, but you might just be able to make out Lilias’s name in the close up. 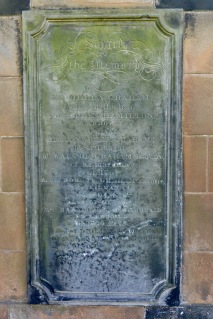 Tombstone for the Graham family

And that’s the end of this short series, Graveyards of Glasgow, at least until I visit a few more burial grounds. I hope you’ve enjoyed it – it’s good to finish with a feisty woman who took no nonsense.