Yesterday, on our visit to Magnolia Plantation we also visited the swamp garden – it’s named after Audubon who visited the house where they have some of his prints. We had already noticed an alligator in one of the ponds at the main garden, but it was swimming too far out to get a good look. In the swamp garden, we suddenly heard a lot of splashing and noticed a bird struggling then disappear beneath the water. The people in front called out that they had seen an alligator take it and that we could see one up closer where they were standing. We then saw this guy:

He was almost camouflaged by duckweed but his eye was clearly visible as he watched us. Eventually, he decided we were of no interest, turned and swam languidly away. 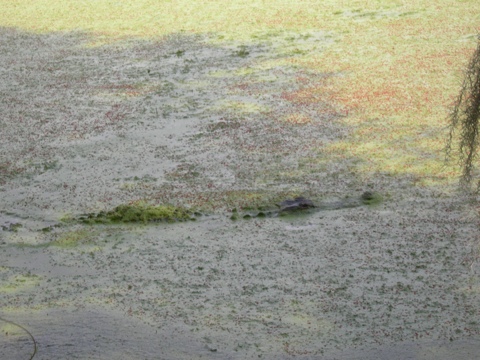 I have a video of him swimming but I can’t seem to attach it with the WordPress app, so that will have to wait till we get home.