We spent the recent Bank Holiday weekend in North Berwick in East Lothian. Our friends from Yorkshire drove up to meet us and we stayed in the beautiful Royal Apartments, complete with view over the harbour and Bass Rock. Confession: the shot on the balcony is staged. Despite the sun, it was very cold and we headed back inside to finish our G&Ts as soon as John pressed the shutter.

Although we’ve visited North Berwick several times as day-trippers, this was the first time we’d stayed in the town. John, however, spent several family holidays there in his youth – and thereby hangs a tale (or two). The Royal Apartments are built on the site of the old Royal Hotel where a very small John persuaded his even smaller brother and sister to turn the taps on in the basin to the point of flooding. “No, Mummy, it wasn’t me!” Tsk, tsk.

On Saturday morning, we took the Three Islands Seabird Seafari around the Lamb, Craigleith and the Bass Rock. All were teeming with bird-life: the Bass Rock is home to over 150,000 gannets at the peak of the season. The trip, in a 12-seater RIB (rigid inflatable boat) was choppy – and just this side of unsettling. First, we had to don our waterproofs.

Then we set off. I can’t remember which birds were from which island, but by the foghorn and lighthouse we had reached the Bass Rock. We had good views back to the Rock and forward to Tantallon Castle on the return journey to the harbour. 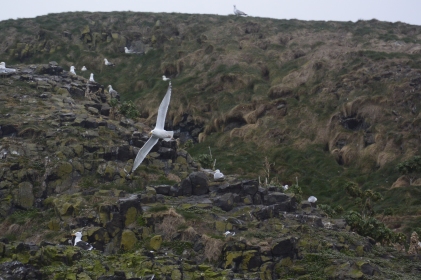 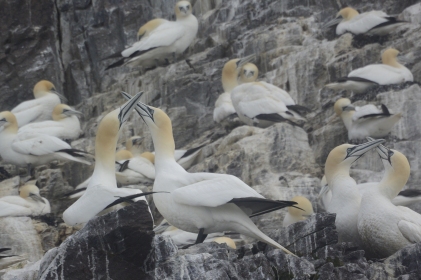 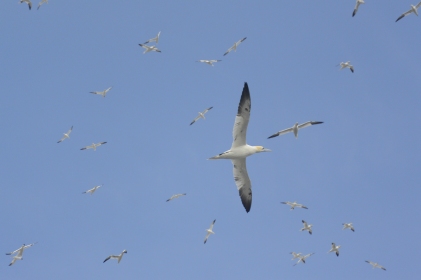 On another family holiday, a teenage John and his cousin decided to row out to the Bass Rock from the beach near Tantallon. When their mothers discovered what they had done, they called out the lifeboat – but the boys got back before they had to be rescued. To (belatedly) salve his conscience, John popped a generous donation into the Royal National Lifeboat Institution collecting tin on Saturday afternoon.

There’s more to come on our East Lothian trip – though without the embarrassing (for John) family recollections.